A good golf ball is the most vital thing to improve your game consistently. However, picking the right one can be tricky. Check our Bridgestone e12 review to find out.

How to pick the right ball for your needs?

Before going to the Bridgestone e12 review, we would like to familiarize you with what to look for in a ball while choosing your own golf ball. Why do we believe golf balls can even be more important than your golf clubs? The answer is simple. You hit several times with a driver or a putter and you spend long hours learning about them. Indeed, they are important with regard to your skills. Yet, the fact that the golf ball is the equipment that we use for every shot goes unnoticed. We need to put more emphasis on choosing the right golf ball.

The features of a good golf ball 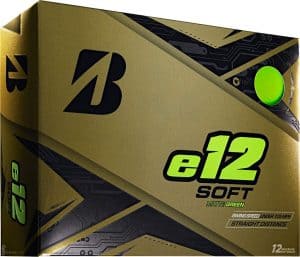 We already know the golf ball is important. How do we choose the perfect one? The first thing we need to check is the compression rate. I am aware that the trend in the golf ball market is softer balls; however, we should know that the more compression rating the golf ball has, the longer distances we can shoot it. It is not just wishful thinking, conversely, this is a fact.

Tests showed that average carry distance between short balls and long balls can be more than 17 yards if you shoot at 115 mph. If you shoot at 85 mph, this distance goes as low as 8 yards.

Another thing about the golf ball is that we need to keep using the same golf ball in our game. This is simply because there are already too many variables in golf and we do not wish to add one more.

Well, it is high time we went to the Bridgestone e12 review.

Bridgestone is not specifically known for its golf equipment; however, they have been producing golf balls for a long time. The new e12 model is not an improvement of their old e6 ball. As we mentioned, the golf ball market has been in a trend that makes softer and softer balls. I believe this is because playing golf is not a luxury anymore and many people, especially women, started to play golf. So, swing speed is lower and people try to polish their spins. 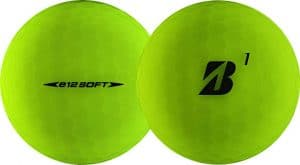 There are two models of the Bridgestone e12. The first one is e12 SOFT, the second one is the e12 SPEED. SOFT has a compression rate of 50 while SPEED has it at 75. If you know a few things about compression rates, you would know that both are quite under-compressed. This feels like you will have shorter distances off the tee.

However, the company emphasizes that the speed will not be affected too much as it uses a different technology that they call a secondary engine. This new mantle will add speed to your shoots.

The cover of the golf ball is made of Surlyn and has three pieces like many other golf balls. We should know that the company used Surlyn in order to eliminate the disadvantages caused by the low compression rate. Surlyn, unlike urethane, is incapable of giving enough spin.

However, the company argues that thanks to its firmer mantle layer, the Surlyn ball spins more than a traditional Surlyn ball. The tests they made with players gave them a clearer idea about that. The ball surely has more friction than other Surlyn balls. Thanks to that, it has more rounds per minute, resulting in giving better spins to the ball.

This is the most enjoyable moment of writing a review: Testing part. The thing with the e12 is that it is soft, even the SPEED version is soft. So, as expected when we touched the ball, we felt the softness right away. You need to shoot the ball with lower swing speeds if you want to maximize its performance. 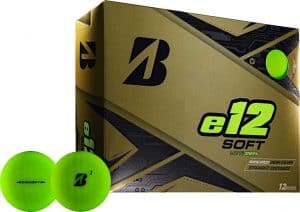 There was an old guy with us and even though he is an experienced golf player, he lost his swing speed due to his age in time. After the first shot, he turned to us, smiled and said: “I felt like I was playing golf back in 2000.”
The second shot he took was right up in the air. Just as a comparison we tried a high compression Titleist with the same guy, and his shot was much shorter with that.

Then I tried it on my own. Surely, it does not exactly feel like normal soft balls. Hence, I gave it a few more shots. It is quite well for a beginner and an intermediate golfer. It goes quite long and straight.

We also tried it with a swing robot. I should say that it is more consistent than other soft balls. Some soft balls go totally different places even with a consistently swinging robot. This happens due to its design malfunctions. For example, some balls are not exactly round or dimples have problems like they are not regularly scattered around the golf ball.

In general, Bridgestone e12 has minor to none problems with inconsistency. It is very well-designed and quite consistent.

To sum things up, the Bridgestone offers new technology to follow. Even though it has some disadvantages applying only to advanced players, it is great for beginner and intermediate uses. When you buy this, you are actually buying a type of golf ball that will take you for a long time.